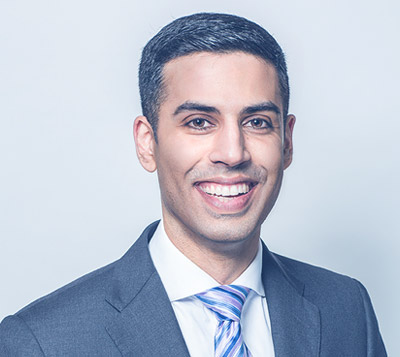 Raj began his career practicing corporate law in Toronto (Torys LLP) and New York (Allen & Overy LLP), representing large transnational corporations. After several years of legal practice dedicated solely to maximizing quarterly returns for his corporate clients, Raj returned to his hometown of Victoria, BC, where he specializes in representing those physically or psychologically injured due to the fault of others, corporations, and/or government institutions.

Raj has argued cases at all levels of the Federal and British Columbia courts. A substantial portion of Raj’s legal practice is dedicated to cases featuring complex liability and causation arguments. Raj has acted as co-counsel and settled cases where individual plaintiff’s have successfully recovered damages of up to eight figures. See some of his representative work below.

Raj also heads Acheson Law’s class action practice, which takes on challenging cases featuring physical or psychological injuries, and human rights violations. Acheson Law was instrumental in drafting the Class Proceedings Act, S.B.C. 1995, c.21 and successfully prosecuted the first class actions in British Columbia. In one action, the firm was successful against the government for negligently setting or applying safety standards applicable to radiant ceiling heating panels, and against the manufacturers of the panels for product liability. The firm also successfully represented British Columbia residents in a class action for injuries caused by the drug Prepulsid and in a class action respecting defective silicone breast implants. Acheson Law was co-counsel in a class action alleging sexual, physical and emotional abuse of students by staff and peers at the Jericho Hill School, a residential school for the deaf and blind operated by the province of British Columbia. For details on our current class actions, click here.

In Heyder v. Canada (Attorney General), 2019 FC 1477, Raj and his associate Patrick Dudding worked with a consortium of five law firms representing all regions of Canada to successfully resolve a national class action providing compensation to members of the Canadian Armed Forces (CAF) who survived sexual harassment, sexual assault, or sexualized discrimination. Critically, the settlement provides for lasting and robust policy changes within the culture of the CAF, and ensures these changes will be maintained via strong, independent oversight measures. The nearly one billion dollar ($1 billion) resolution represents an “historic settlement” for what has been described as “pioneering litigation”. In approving the settlement, Fothergill J. noted:

[82]  The fact that the Settlement Agreement was negotiated at arm’s length and is recommended by experienced counsel also weighs heavily in favour of approval. Class counsel are recognized experts in their fields, and have successfully litigated numerous class actions across Canada. They have considerable experience in settlement mechanics and imperatives, damages methodologies, and the assessment of risks associated with complex and historic litigation.

In Hill v. Murray, 2014 BCSC 1528, Raj and his partner Natalie Foley argued that the plaintiff, who suffered primarily from chronic pain syndrome, a mild traumatic brain injury, and a vestibular injury due to a motor vehicle collision, was entitled to damages for future loss of earning capacity as she was unable return to her pre-accident level of work as a floral supervisor at Butchart Gardens. They presented evidence establishing that the defendant caused the collision when his steel-toed boot became caught under his vehicle’s brake pedal. While trying to get his boot unstuck, he veered into oncoming traffic, struck our client’s vehicle and sent it crashing over an embankment. Macaulay J. agreed and awarded $1,061,224 in damages, including $600,000 for future loss of earning capacity, $23,000 for future loss of employment benefits, and $110,000 for future loss of pension benefits.

In Greig v. Desjardins Financial Financial Security Life Assurance Company, 2019 BCSC 1758, Raj was co-counsel in a case where the plaintiff obtained judgement for aggravated and punitive damages because of the defendant’s conduct, which was found to be “high-handed, arbitrary, and worthy of rebuke”. The punitive damages award alone was $200,000; the highest reported amount in British Columbia for a case where long-term disability benefits were wrongfully denied.

In Vandendorpel v. Evoy, 2016 BCCA 270, Raj successfully appealed a BC Supreme Court finding that the plaintiff was entirely at fault for proceeding through a pedestrian controlled crosswalk in the face of a ``Do Not Walk`` sign, at night and in dark clothing, resulting in injuries due to a collision with a vehicle. The BC Court of Appeal agreed with Raj that the defendant’s speed above the limit, and the defendant’s speed relative to the poor conditions, required a thorough analysis of light sequencing at the crosswalk to determine the degree of fault attributable to the defendant driver, and remitted the matter back to the BC Supreme Court for a determination accordingly.

In Dhami v. Bath, 2014 BCSC 751, Raj argued that the plaintiff had been deceived by the defendant in the context of a real-estate development deal gone bad. Despite the high burden on plaintiffs in proving civil fraud cases, Raj’s effective cross examination of the defendant resulted in Gerow J. finding that the defendant had fraudulently misrepresented material facts to the plaintiff over the course of the deal, and she ordered damages against the defendant accordingly.

In Ballantyne v. General Motors LLC, 2018 BCSC 1886, Raj and his associate Patrick Dudding preserved their catastrophically injured client’s ability to access justice in British Columbia; they did so by successfully resisting General Motors’ application to have the plaintiff pay more than $100,000 into court as security for costs in order to continue his product-liability claim against GM. The Court went on to note that it would “be an injustice to deprive the plaintiff of his right to advance his claim…”.

In The Corporation of the City of Victoria v. Thompson, 2011 BCSC 1810, Raj acted pro-bono on behalf of the Peoples’ Assembly of Victoria and Occupy Victoria, who were staging a civil- and social-rights protest at City Hall. Raj argued that granting the interlocutory injunction that the City of Victoria sought would violate the protesters’ s.2 Charter right to freedom of expression, which should trump the promotional activities of the Downtown Victoria Business Association. Schultes J. distinguished “statutorily-based injunctions” from equitable injunctions, noting that with the former, he had only a very narrow degree of discretion at this interlocutory or interim stage, that such discretion could be triggered only in exceptional circumstances, and that this political protest did not rise to the level of exceptional circumstances. Critically, the Court declined to order an enforcement clause given the overall context of the matter and the issues raised. As with other injunction proceedings against civil- and social-rights advocates, the City of Victoria did not advance the matter to a trial where the substantive Charter arguments could be considered.

When not working, Raj focuses his attention on issues of social justice, both locally and abroad. Raj often provides pro-bono legal services to progressive, local organizations striving to bring about positive social change.

Have you been injured through no fault of your own?

Find the best lawyer for your case.